Campaigns:
Campaign, March 2010 - "Where Have All the Lions Gone?"
"How to kill a lion and feel jolly good about it"
Bomas
Innovative predator/livestock conflict mitigation pilot programme in Kenya
Lions killed in retaliation for killing livestock
Livestock killed by lions
Stalking lions

In March 2010, LionAid  initiated a campaign in the UK that drove home a powerful message about the survival of lions in the wild.

The message? Lose lions in the wild, and lose them at home. Extinction on the African plains means loss of icons and symbols. Imagine a life without lions, including those you are so used to?

So on March 1st, LionAid embarked on a 12 city tour, covering iconic lion monuments with a black shroud for the day in some of our favourite cities.

Beginning in Glasgow with the magnificent Cenotaph lions in George Square, we continued to cover lions in Blantyre, Blackpool, Manchester, Liverpool, Birmingham, Nottingham, Norwich, Bath, Portsmouth, Isle of Wight and culminated in Trafalgar Square with perhaps the most famous lion monuments of all!

In each city, we had a wonderful welcome and met Lord Mayors, Leaders of City Councils, The Lord Provost in Glasgow and the Deputy Sheriff in Norwich.

We also met Andrew Turner, MP in the Isle of Wight and he then went on to secure the debate on lions with us in Parliament on the 17th November.

Displaying thumbnails 1 to 6 out of 15 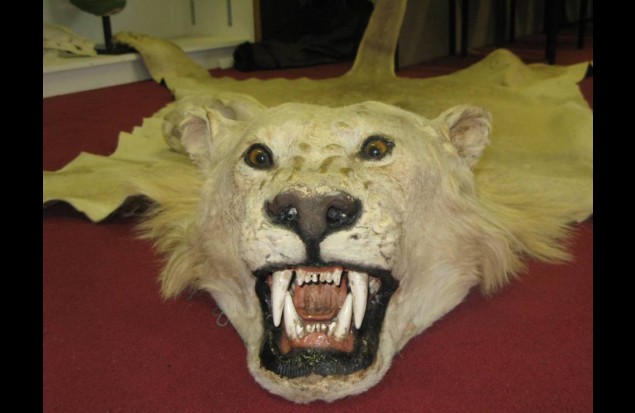 The Education Department in Blackpool zoo educates the public to the illegal trade in lion trophies.